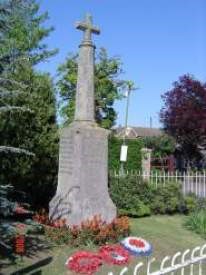 To those who fell in the Great War

The memory of the young men of Manston who went to war never to return has been perpetuated by the erection of a handsome cross at the converging roads of the peaceful village. Manston lives in peace because these young men and millions of others like them went out to defend the Empire, and the sadness of memory for the fallen was alleviated on Tuesday afternoon when the memorial was dedicated and unveiled in the presence of a large gathering.

Manston stopped its ordinary pursuits for the occasion. The young men from the farms, the blue-clad men of the R.A.F., sad eyed mothers and fathers gathered in the tiny church to take part in the service of recognition – recognition of the burden cheerfully borne by the warriors of the village, and of the neighbouring hamlets of Haine and Cliff’s End, who surrendered their all at the altar of sacrifice.

There was an appropriateness surrounding the proceedings which breathed the spirit of comfort and proud bereavement for those who had lost their near and dear ones. The sunny afternoon seemed to reflect the warm patriotism of the men who had gone: Cannon T.G. Crosse, Rector of …….  who has himself lost two sons in the conflict, gave the address; Wing Commander Primrose O.C. at the Manston Air Station, a youthful veteran whose breast bore a string of honours and decorations, unveiled the monument; Mr E. L. Martins, who is the “father” of Manston’s youth, organised the fund for raising the cross and led the music at the ceremony. All was in keeping with Manston’s act of remembrance.

The poignant note of pathos was present. Mothers and sisters who had lost sons and brothers trooped into the little church with their floral symbols of remembrance, silent witness of aching heart and fragrant reminder.

Manston lost seventeen men in the war. Two of them, Frederick Bean and Harry Maxted, went down with Kitchener when the Hampshire foundered. Others from the village were also victims of the war, but they are not traced, and it remained for the Memorial Committee to perpetuate the names of those who joined up from Manston, and who can be claimed as Manston’s heroes who died.

On the buoyant notes of the revised version of the National Anthem the service in the church opened:

Absence of sect and dogma was shown by the presence of the Rev. W. Howarth, the superintendent minister of the Wesleyan Circuit, who read the lesson; whilst the attendance of Mr. A.E.G. Solly and others who do not claim membership of the Established Church proved unity of desire. The Rev. G.E. Barnwell, curate of Manston, conducted the service. Canon Crosse comforted those who mourned their dead by mentioning that the graves in France and Flanders were beautifully tended and carefully kept. He had gone there to visit the graves of his own sons, and knew that all that could be done was being done. In visiting that little church where once he served, he was reminded of the days when he used to go there accompanied by the two boys who now rested in their graves in the battle area.

Though the war was a universal calamity, he saw that it brought out all that was best in us, the spirit of sacrifice, fearless gallantry, and unquenchable patriotism. On the comforting note that death opened the gate to the Greater Life, the Canon concluded a homely and apposite address.

Then the procession passed into the brilliant sunshine of the village square, where the R.A.F. (Manston) Band accompanied the remainder of the hymns, under the conductorship of Bandmaster E.J. Twitchett, and the Union Jack which enfolded the cross of white was released by Wing-Commander Primrose.

The theme of his short address was founded on the fact that although they had erected that imperishable cross to the memory of their dead, the memory of those who had gone was enshrined for ever in their hearts. Whilst they mourned their losses at Manston, it was consoling to reflect that the greatness of England was made by such small places as that. He hoped that those who passed the monument would always salute the dead, and he asked the people of the village to establish that practice, and to see that all who came into the place showed to their dead heroes the honour that was due.

And as a final touch to an impressive ceremony came the shrill notes of the “Last Post” with its echoed sequel of the “Reveille” sounding stirringly from the trees beyond the church; and the generous offering of flowers at the foot of the cross in memory of those whose names were on deathlera stone and of others who had died that England should live.

Mr. A.D. Sackett of Ramsgate, constructed and erected the cross. 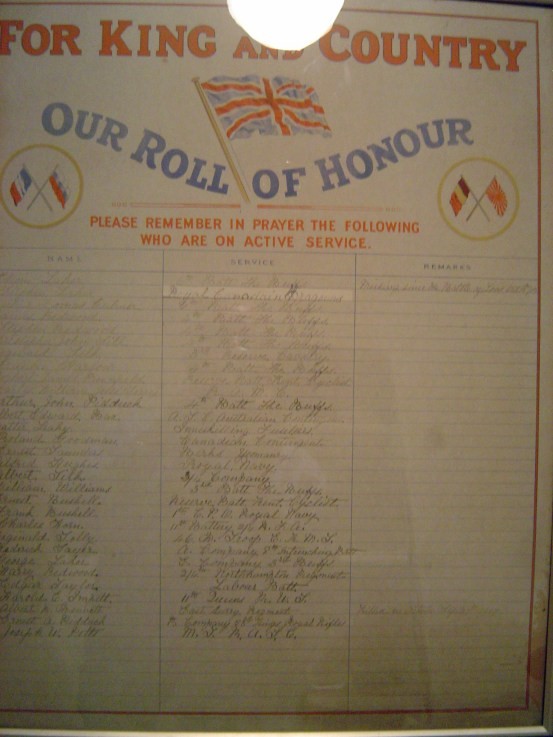